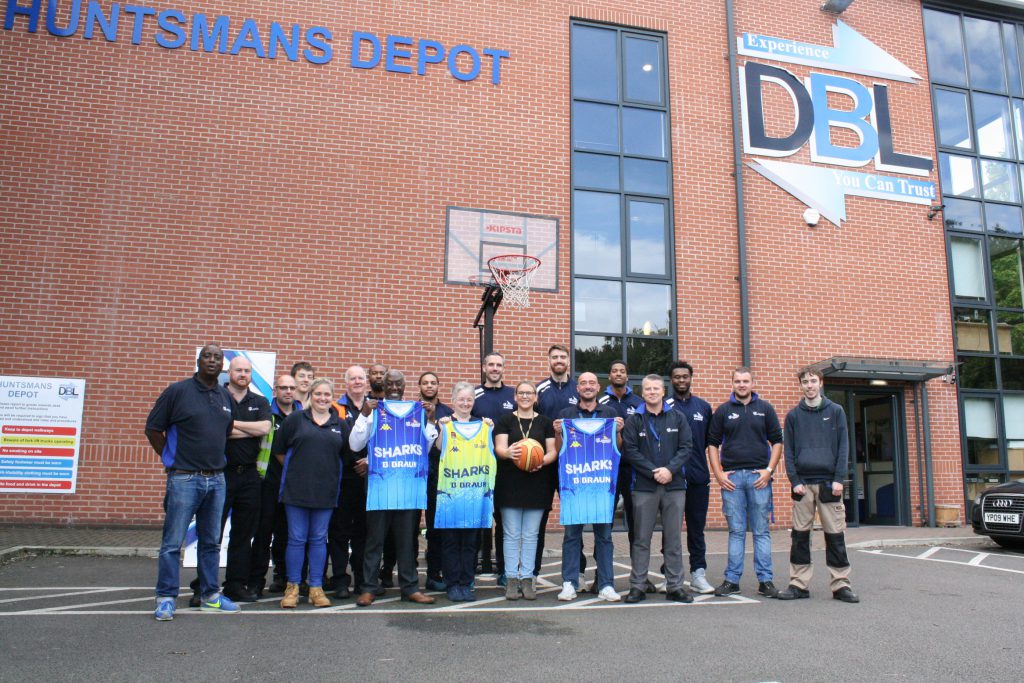 We held a special street basketball shootout with the DBL Sharks Sheffield to welcome the start of our second season as naming rights sponsor of the British Basketball League (BBL) club.

It was Sharks v staff at the Huntsmans Depot, our Tinsley Park Road home, as Sharks head coach Atiba Lyons and his players marked the start of the DBL Sharks’ 2017/18 season.

Sharks fans were also given another glimpse of the side’s new kit, which was displayed by the combined Sharks and DBL team during a post-event photoshoot.

Dave Clarkson, our managing director, said: “We’re extremely proud to be naming rights sponsor and we can’t wait for the new season to start.

“It was brilliant to see the new team come down to our depot for a bit of freestyle basketball and to see plenty of happy, smiling faces.

“The Sharks stand for very similar values to ourselves at DBL – we’re a family-run firm with an ethos of fantastic customer service, while the Sharks is an extremely welcoming organisation and offers what is simply a brilliant night’s entertainment.

“Add to that what we believe is a very strong group of players this year and the whole experience is fantastic. We’re really optimistic about the season ahead.”

Atiba Lyons, DBL Sharks Sheffield head coach, said: “DBL Logistics are always very supportive and make an effort to show the Sharks that they really care, and that makes a difference – especially when you have new players like we do this year.

“It helps them settle in when they know they’re more than just a piece and a commodity, and that people wish them well on and off the court.

“It’s a good atmosphere and it’s been a good pre-season. The players seem to really enjoy each other’s company and they play well together, they have fun and they laugh but they also compete. So from the start we know it’s going to be a solid year because of that – but we’ll see how it goes.”

The DBL Sharks Sheffield start the 2017/18 British Basketball League season against Surrey Scorchers at the English Institute of Sport Sheffield on Friday 29 September – for more information or for tickets visit www.sharksbasketball.org.