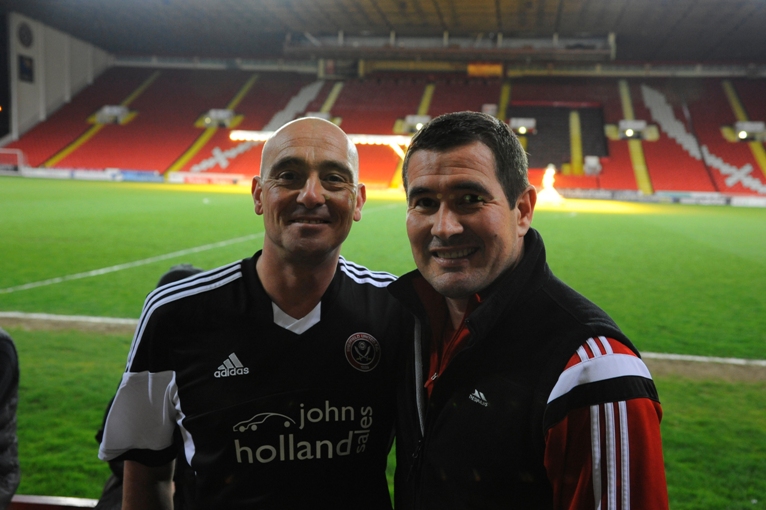 Managing director Dave Clarkson has raised more than £2,000 by taking part in a sponsored sleepout at Bramall Lane.

The event, named Sleepout United – the first of its kind at Bramall Lane – saw more than 150 people take part, including surprise participant and manager of Sheffield United, Nigel Clough.

Dave joined fellow Blades from across the region in using cardboard and sleeping bags to spend the night in designated areas around the stadium.

The evening saw entertainment in the shape of performances from the Dinnington Colliery Brass Band and Bolsterstone Male Voice Choir who were joined at the end of their set by participants in a rousing rendition of the Greasy Chip Butty Song, whilst Blades legend Tony Currie came along to talk to participants in the stands.

Lights then went out at 11pm before the event was brought to a close at 7am the following morning. Other participants included Miss South Yorkshire, Stephanie Hill, and Sheffield United managing director Mal Brannigan.

Dave Clarkson said: “Sleepout United was a superb event and it was fantastic to see Club staff members such as Nigel Clough and Mal Brannigan take part, which is a true reflection of Sheffield United’s community values.

“I’d like to thank everyone who has donated to the cause and I hope it goes some way to boosting both of these wonderful local charities.”

One of the organisers of the event, Amy Casbolt, fundraising co-ordinator at Roundabout, said: “Sleepout United has been a tremendous success.

“Events such as these are vital for charities such as Roundabout and St. Wilfrid’s as the funds raised helps to keep our services running.

“Raising awareness of the ever increasing problem of homelessness is also important as there are a lot of vulnerable people – young and old – in the city that need our support. “They may be struggling to find accommodation or rough sleeping and this sort of event – although not the same as being homeless – does help to raise awareness and make you think about what it might be like to not have a bed for the night.”